Across the dead earth, want to come?

These rules are still in BETA but I manage to get hold of them and try them out. Setting is in UK which is perfect for me. But a small mistake has still been done in the above picture. Still looks cool! Game and miniatures will soon hit a KICKSTARTER. March if I am not mistaken, go have a look Across the dead earth or check their facebook Facebooklink .

These are the 2 gangs we will be using. Lone is to the left and mine to the right. I will make this bat rep as a story, which some of you have seen before from me. Thus I can tell what happened without talking rules. I will say though, a nice aspect of this game is that you get some cards to play. A little help for yourself or a nasty surprise for your opponent. 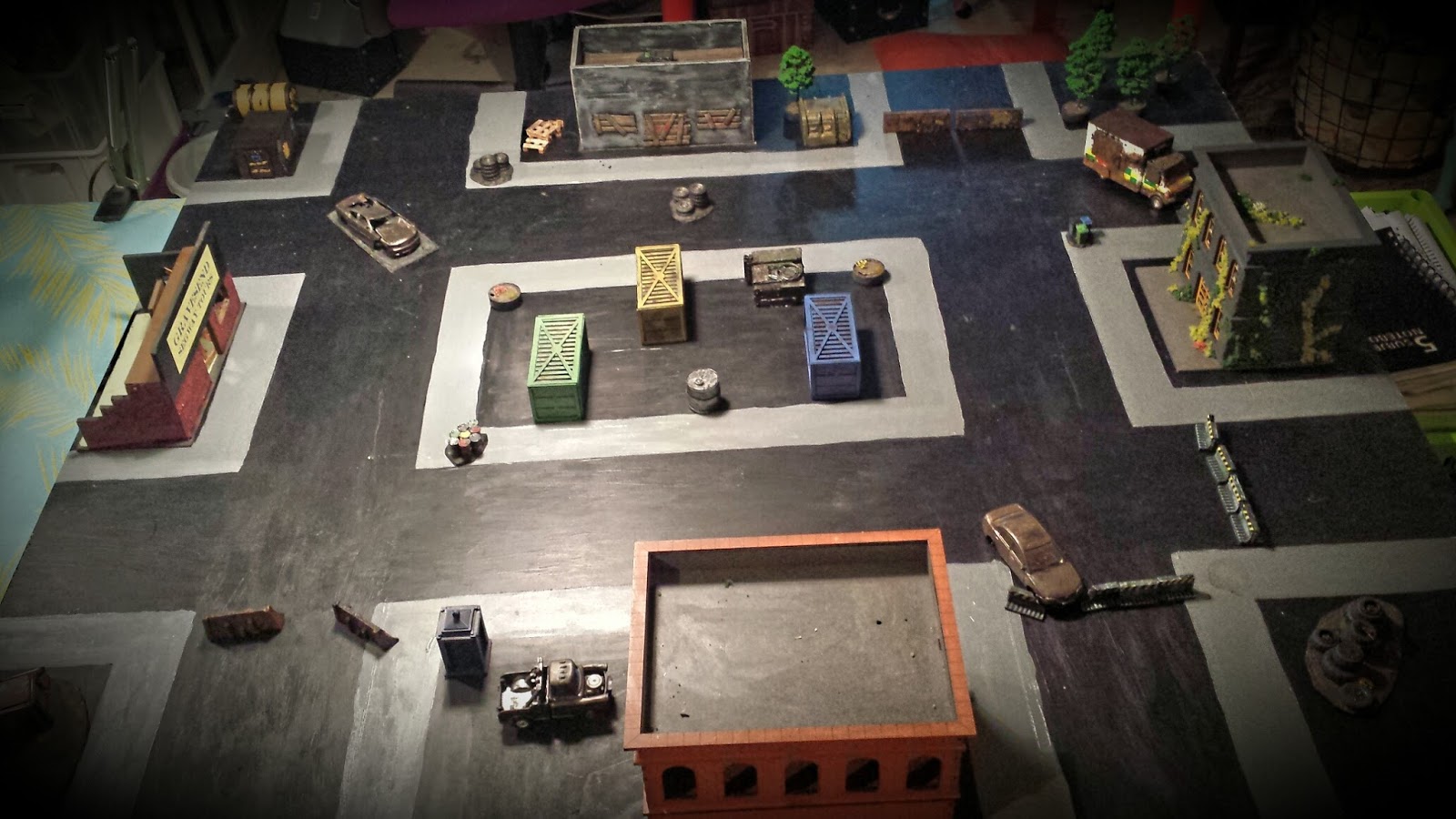 The board, Lone will set up on this side and I will set up directly across from her. Mind you....I already know now that we needed much more terrain on the board!!! 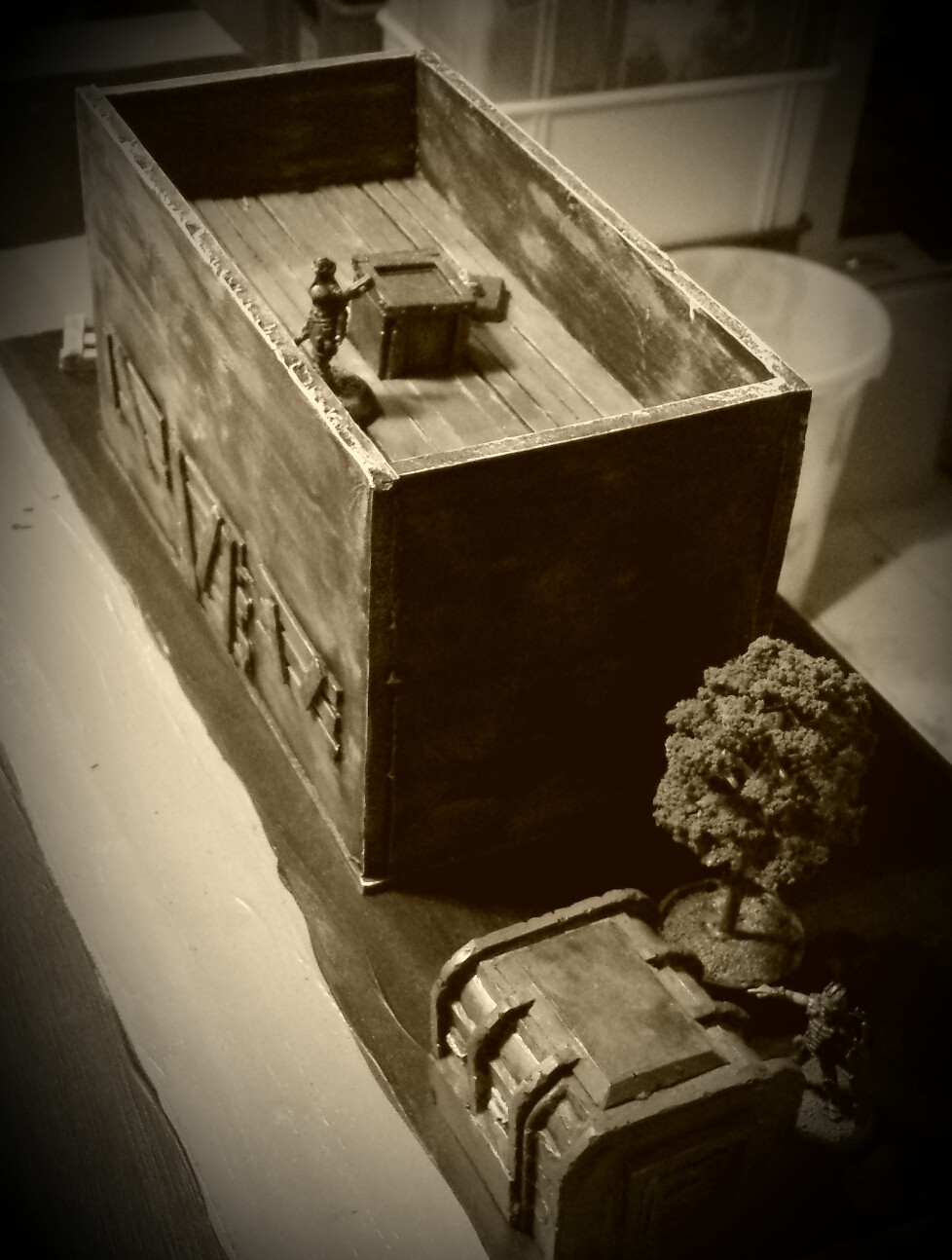 A day just like yesterday. Took some of my gang foraging. Crystal went to the rooftop in order for a better view. Most days I call her paranoid, this day I thank her for being paranoid! Movement not too far from us, 4 individuals. We got ready for a scrap. Nobody around here will offer you a cup of tea when they see you! 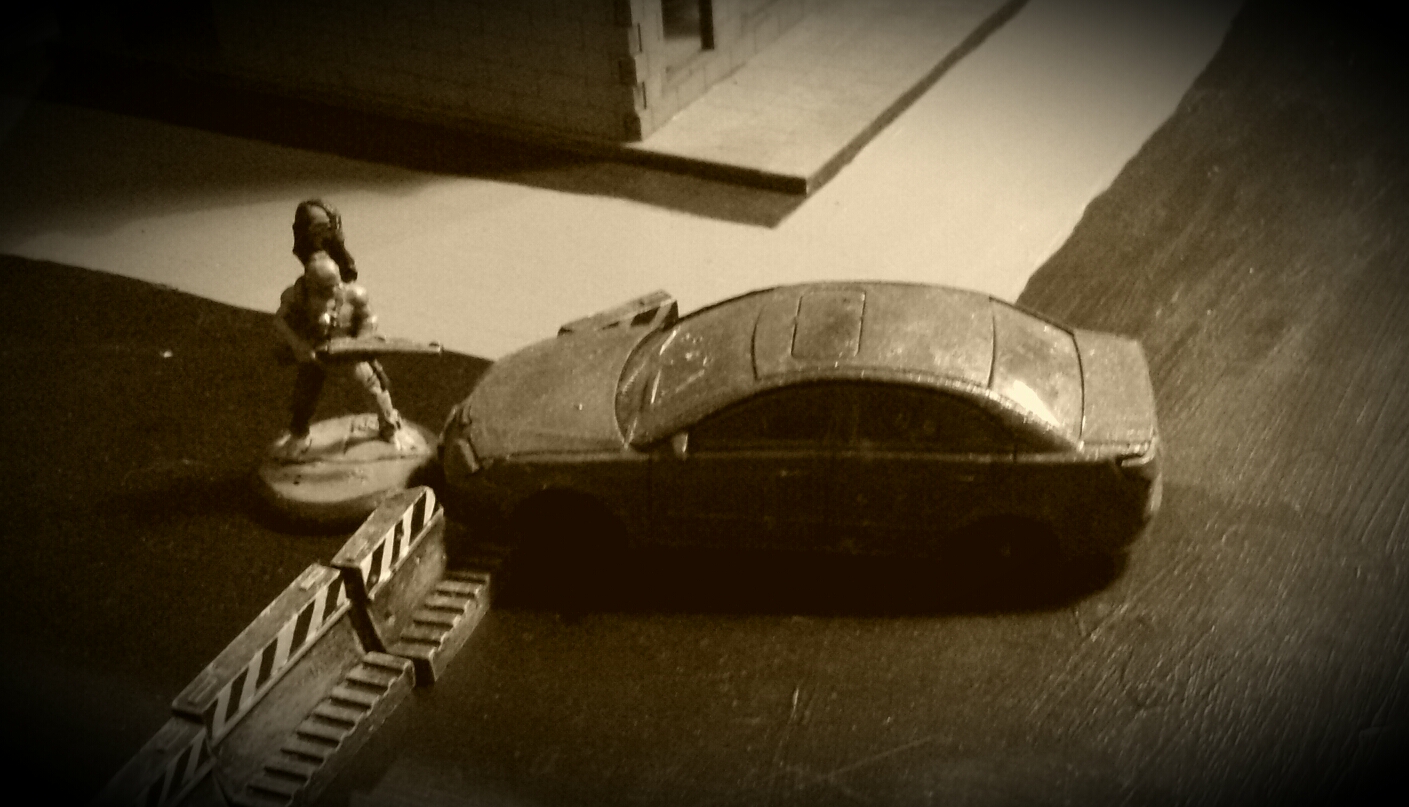 A rebel yell pierced the city! And that was when I saw the source of that yell. Tonga, leader of the Black Rose clan, and I knew this meant trouble! Cutthroats, bandits and in general not good company. My clan is ofcourse nothing like that. The Bollocks are the good guys! I made sure Ralph and his trusty flamethrower took James out on the left flank, see if we could give them a surprise. Pretty damn sure Tonga were not alone over there! Crystal had my back so I ran forward to get a better view of things. 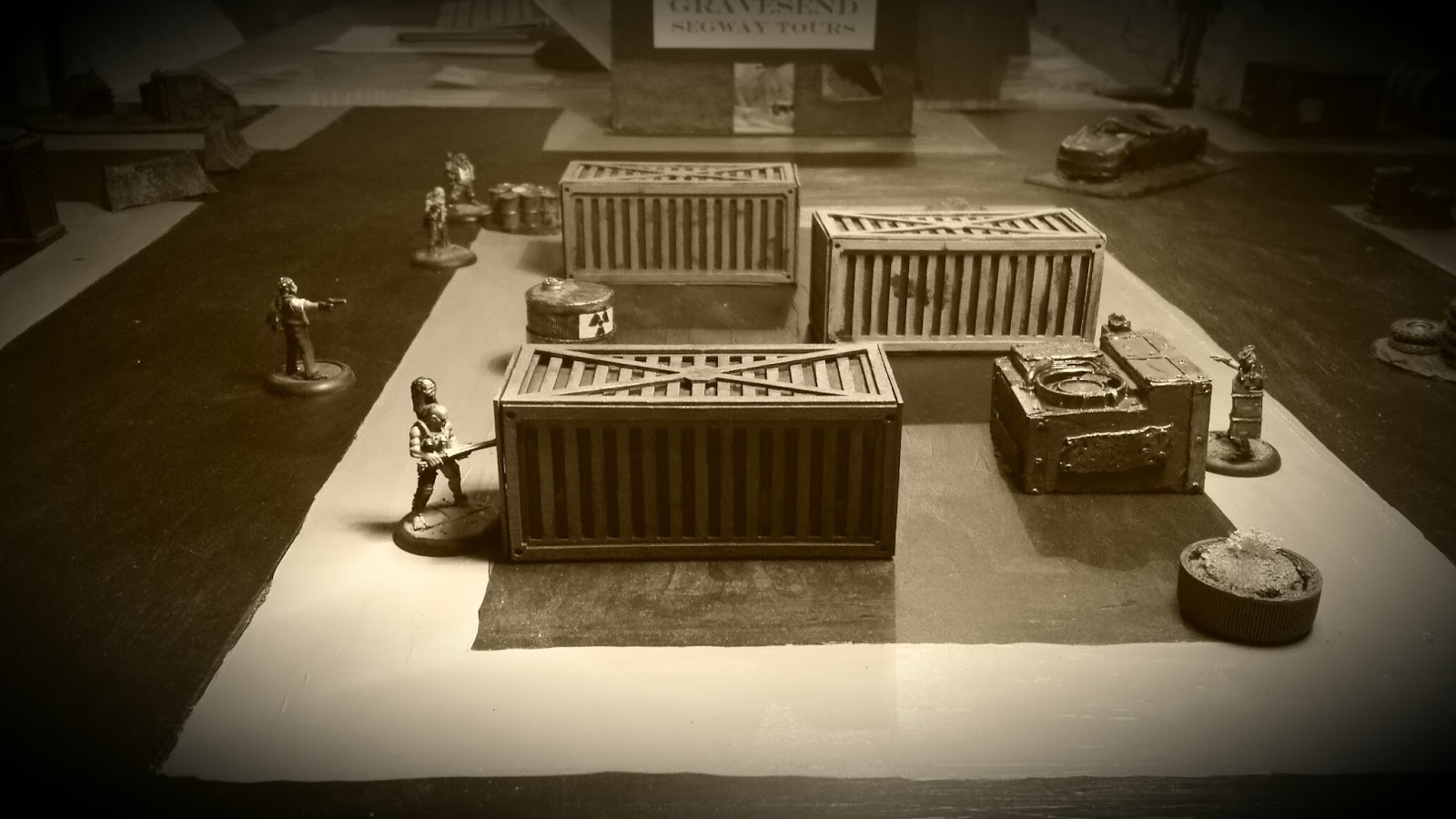 I did not like what I found out! And they all were coming in my direction! I am not one to admit making a bad plan, I always have backup! James came running out from the cover of the house, his gun trained at Tonga. Suddenly he stopped dead in his tracks as a flock of birds flew by! "What the hell James?! Get back in cover!" Tonga took advantage of this, fired both barrels of his shotgun and James went down! Ralph walked out with confidence and turned the flamethrower at Tonga! This is the point where I thought is was over, but no....Tonga stopped, dropped and rolled. Only suffering minor fleshwounds and stood up laughing! One from The Black Rose clan turned the corner of the container and took a wild shot at Ralph, which went down. He did not even make a sound, just collapsed like a marionett with the strings cut! Time for some revenge, I took my time and aimed my pistol at Tonga, die you bastard! 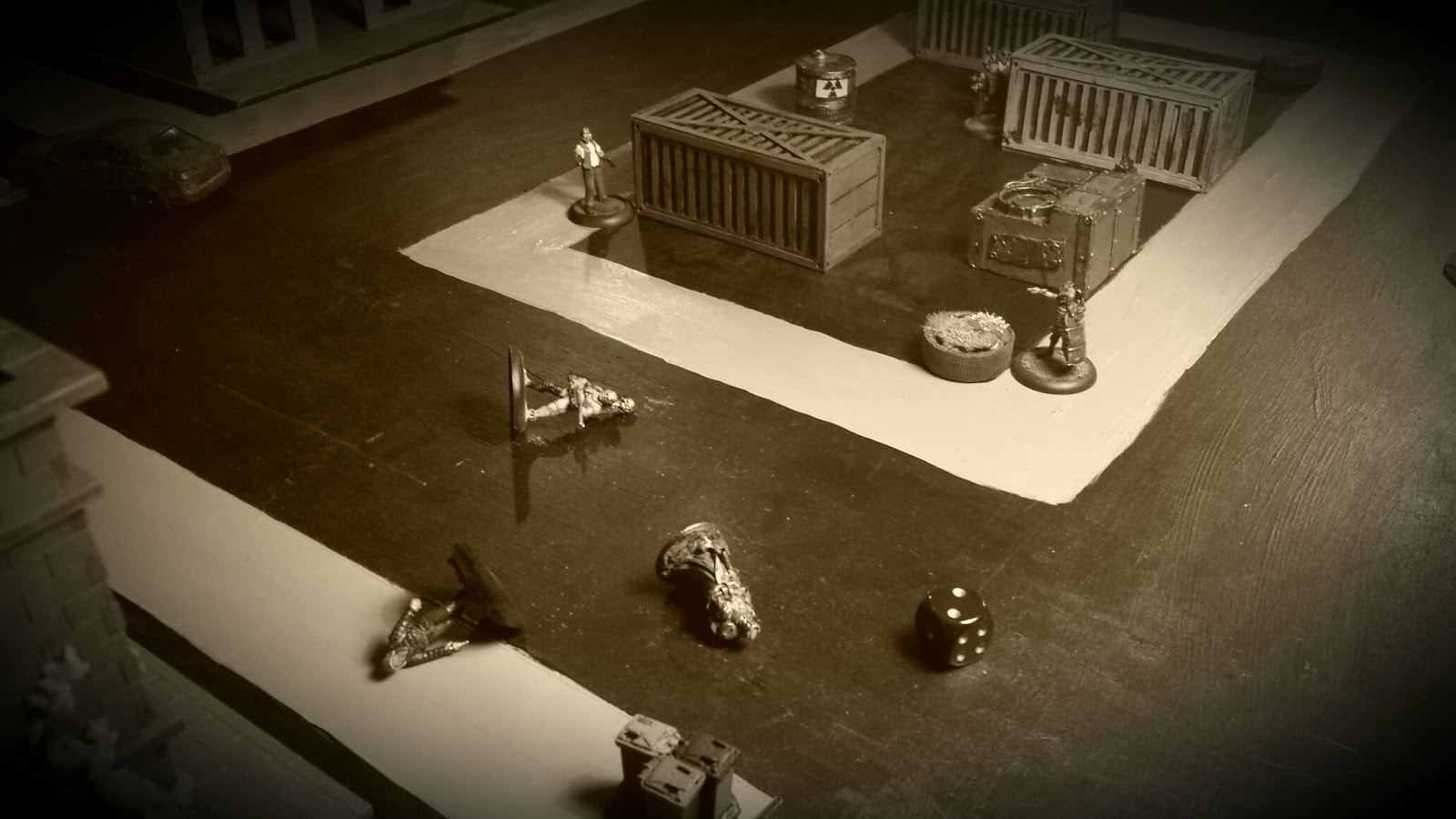 This was turning into a bloodbath! I heard the distinct sound of Crystals gun, and a grunt as one of the other gang members went down! We were not beaten yet, though neither of us would turn and run from this! The Black Rose that tok out Ralph had me point blank! I will never forget his face...As his gun jammed! I recovered quickly and made sure he did not get another chance! My shield got him under the chin and he went down! 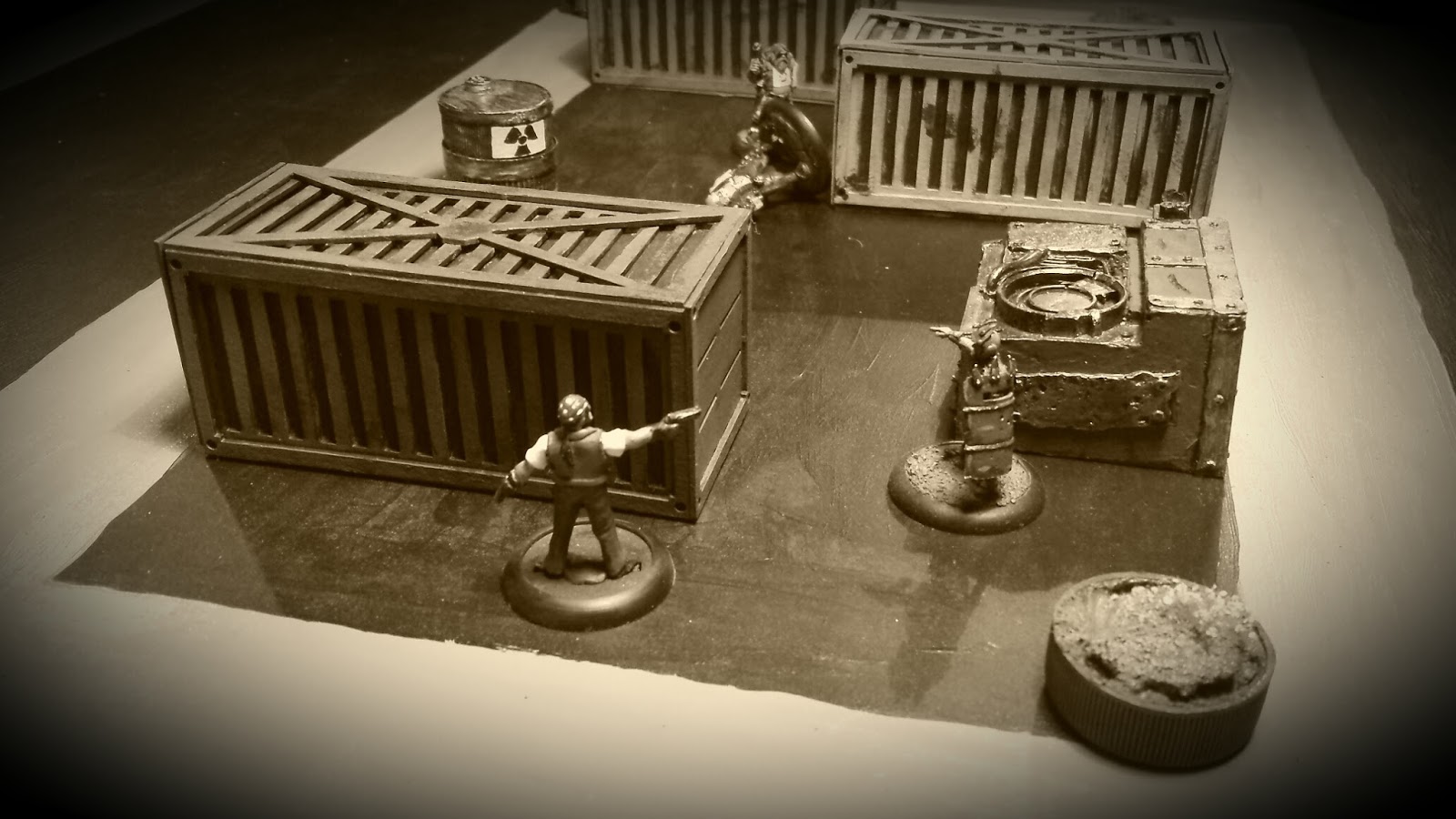 The last Black Rose caming charging madly at me! Only to stop right in front of me as he was distracted by a loud whistle! Never waste a golden opportunity as this! Well since you know who is writing this down, then I think you know what happened. Time to take care of the wounded and get back to camp. 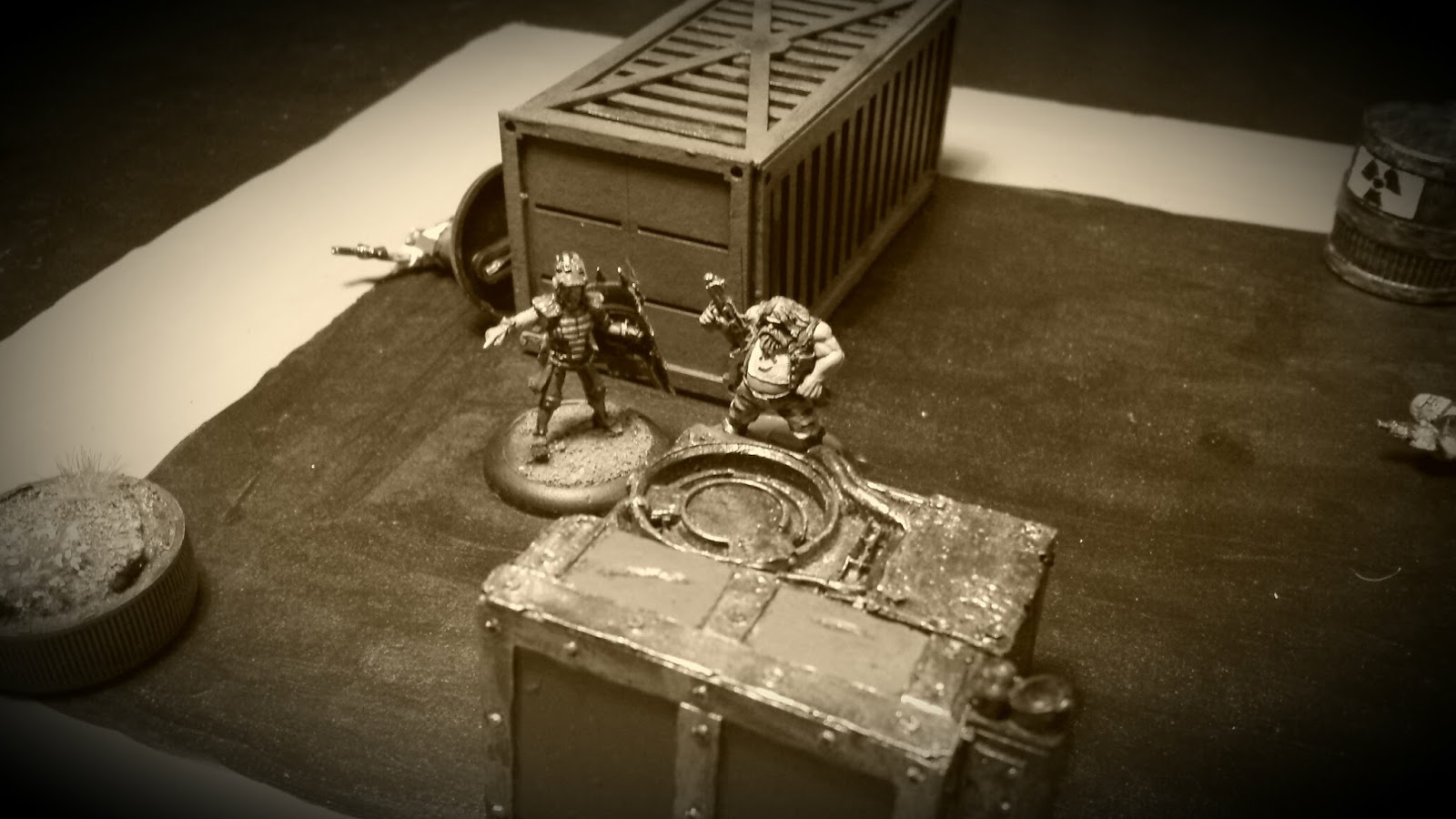 Battle report thoughts: More terrain. It will do the game good, damn this got bloody, and bloody fast!
Really like that it is fast paced. You do not sit around waiting for your opponent to finish his turn with all the movement, shooting and hand to hand. No...You have an active part constantly.

It leans heavily towards campaigning. And I think the game will benefit more as your gangers gain some advances. For those of you old enoúgh to remember Necromunda, then you will know what I am talking about!

The rolls to be made was quite easy to get hang of. I needed to check ranges and stats for those ranges constantly but it was really no bother. If you have the weapons written down in front of you together with the gang then you do not need the rulebook that much.

There are some stuff that I actually forgot and thus we did not have into play. Putting Crystal in overwatch could have helped me, more terrain on the board would have been much better and remembering the skills could maybe have helped.

And although I won, Lone challenged me to a new game! On certain terms:
More terrain.
She will make her own gang.
I must not laugh when shooting at one of her models.

There are still some changes to be made as this is still in betamode. I have sent my thoughts to the guys behind the rules and talked to Brummie who is in as playtester as well. You can be sure to get more of this from me. And please go check the links. So far 3 miniatures have been made and looking cool. The kickstarter will be there to make funds for making 2 (3) complete gangs and printing the final rulebook. I will be backing this project. Easy to learn and fun to play. Post apocalyptic fighting in the UK.